Home › Reviews › A Review of Shahrazad, A Tile-Laying Board Game

A Review of Shahrazad, A Tile-Laying Board Game 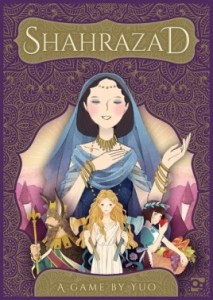 Shahrazad is the storyteller in One Thousand and One Nights (commonly referred to as “Arabian Nights“), the book which includes the tales of Aladdin and Ali Baba. You, on the other hand, will be playing the role of Shahrazad, who happens to be the inspiration for the new game of the same name published by Osprey Games.

Your goal in Shahrazad is to be the best storyteller and impress The King. In practice, this solitaire or two-player cooperative game is about playing tiles to create sequential chains of numbers (from lowest to highest), while also connecting as many adjacent, like-colored tiles as possible.

In doing so — or in doing so poorly — you are in effect telling great stories, nonsensical stories, or something in between. Whatever the result, your final score will be the judge as you receive one of five “verdicts” from the king, with different results for solitaire and co-op games.

The game includes 22 thick and sturdy story tiles, each of which represents a different folk tale from around the world. The tiles come in four sets of colors (four black, five yellow, six blue, and seven red).

Printed on each of these tiles is a number between zero and 21, and a sequence of all the numbers within the colored set printed along each tile’s bottom for reference (see the accompanying picture).

You can place a tile in any open spot above, below, left or right of an existing tile. The only restriction is that you can never have more than three tiles in a vertical column in a two-player game, or four vertical tiles in a solitaire game, and tile placements must be staggered (see picture below).

As mentioned earlier, your ultimate goal is to create chains of tiles (from left to right) that increase numerically, as well as having as many like-colored adjacent tiles as luck and planning allow.

Scoring for The King’s Verdict

After all the tiles are placed, the round ends. First, while scanning left to right, in instances where tiles are touching another tile and are not numerically greater than a preceding tile, you flip the greater of the two tiles over. In other words, if a 19 follows a 21, the 21 gets flipped over.

There’s one final thing to look over before scoring. You must make sure the remaining face-up tiles are touching each other in a continuous line from left to right. If not, you must flip over even more tiles. Flipping tiles isn’t good! In the end, all the face-down tiles count against your score, and the face-up tiles are your points.

You also get a point for the largest groups of colored tiles touching one another in each set, so you will get points for groupings of red, yellow, blue and black, even if your so-called grouping is just one tile. Nice try. Better luck next time. If a demoralizing first round featuring a bounty of flipped tiles isn’t enough of a kick in the groin, you must discard all the flipped tiles before beginning round two.

So, after tallying everything up, you play one more round by keeping a column of your choice and re-shuffling the rest of the tiles. Add the two rounds together for a final score, and read one of five “verdicts” from the king. (There are five verdicts for the Solitaire game and five for two players.)

For example, the best score (35+) in a two-player game gets you a heartfelt, “I’m not crying, you’re crying” result. The worst verdict (0-4) is “Were you two telling the same tale?” An average score (20-29) in the Solitaire version gets you a snarky, “Not bad, but I preferred the movie” result.

As has been the case with all of Osprey’s games, the art and packaging are beautiful. The rules in Shahrazad are well-written, and games last about 20 minutes or less, depending on the speed of your internal processor. I probably need to reboot.

Speaking of internal processors, if you’re the kind of person (me!) who can’t remember a score from the first round, two scoring tiles are also included with the game so you can line up the corner of one tile with the appropriate row and column on a grid to keep perfect score. Plus, these are the tiles that also have the verdicts.

I’m always on the lookout for fun portable games when I travel, and Shahrazad will definitely go places. Plus, the game box is just the right size to fit all the contents. (See my Game Heavy and Travel Light article to find out how many games one man can fit in a box. It’s epic.)

As an added bonus, the tiles are crazy thick! An unexpected advantage to this is I was able to play on my backyard deck on a beautiful windy day. There aren’t many games that allow you to undermine Mother Nature.

Finally, Shahrazad is one of those games that you could comfortably purchase for a seasoned gamer friend, or even an older relative who may not have discovered the glory of modern gaming. In either case, you will have made a wise choice, as I believe that easy-to-learn, quick-playing, and “thinky” games such as this appeal to a much wider audience as much as they do to me.

Now, back to telling stories. I’m still holding out for my solo “Truly Wonderful” verdict from the king. The guy is a jerk, but I crave his validation.

Scheherazade (Shahrazad, Persian) by Sophie Gengembre Anderson – Artwork in the permanent collection of The New Art Gallery Walsall, uploaded as part of a Wikipedian in Residency project., Public Domain, https://commons.wikimedia.org/w/index.php?curid=26152726