Home › Episodes › A Review of Tales of the Arabian Nights Board Game — It’s Just Like the Corn Palace!

A Review of Tales of the Arabian Nights Board Game — It’s Just Like the Corn Palace! 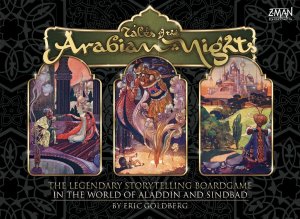 If you’re not familiar with Tales of the Arabian Nights boardgame by Z-Man Games, it is best described as a random, story-driven activity. I know that’s a bit harsh, but I have to be truthful with you, dear gamers. My views on this game are the result of evolution and personal growth, and you can’t argue with that now can you? Yeah, I thought you might.

In Tales of the Arabian Nights you choose a character of legend, such as Aladdin, Ali Baba, Zumurrud (who?) or Sinbad, and then move around the board having encounters which are randomly generated through cards, die rolls, a decision or two, and some tables. Ultimately you end up at a paragraph to read within the quite impressive 300-page Book of Tales. There are 2,600 entries in there. If you’re lucky (and I want to stress lucky), these adventure paragraphs give you Story and Destiny points, in addition to a never-ending cavalcade of nasty. You’ll be imprisoned, insane, cripple, etc. There are some good things, too, but the Story and Destiny points are what you need to collect to win the game.

Stream Episode 21 (Tale of the Arabian Nights) below, visit iTunes, or grab the mp3 file. Note that the podcast format features additional content, including an hilarious Amazon.com review, pissing and moaning about the coming snowstorm and self-indulgent plugs! How can you resist?!

Links to information featured in this episode:

Tales of the Arabian Nights boardgame

Tales of the Arabian Nights is a game for which I have some mixed feelings. My brother Dave first introduced me to it, and I think I am guilty of piggy backing on his enthusiasm the first few times we played it. I mean, I was feeling a tinge of the “clunkiness” vibe, but we were having fun in spite of it. I guess that’s where the mixed feelings come in. I have had fun playing Tales of the Arabian Nights.

Some time has passed since my brother and I last played. In fact, I would say it’s been nearly two years. Since then, I’ve purchased my own copy, and I’ve daydreamed about returning to its adventures and rekindling the good times. When you’re surrounded by hundreds of games, sometimes it takes a while, as many of you know. Some friends and I recently had a chance to pull the game back into service a few nights ago.

We had fun (I mean it’s friends, games and beer, after all), but I feel the caveats to that label (fun) are destined to get longer and longer with repeat playings. The fact is I want to get my meaty paws on the design of this game and fix things.

Let me explain myself. Don’t go nuts. I’m the first to get in line for games that have you reading paragraphs that immerse you in a story-driven game. Eldritch Horror comes to mind, and it is one of my favorites, and I think one of the best at doing that, but the problem for me with Tales of the Arabian Nights is that you’re not really playing the game; the game is playing you.

There’s all this stuff designed to make you feel like you have some control over the outcome, but you don’t. You see there are all these skills you can have in the game. You can collect them, lose them, and even master them. They are the RPG equivalent of proficiencies or skills. You will be sitting there all proud of your thematically chosen Stealth and Stealing skill, mixed with skill in Acting & Disguise, and topped off with Luck and a pinch of Wilderness Lore. That’s right, my name is Sinbad, and I’m a bad-ass thief with the skills to prove it. Only, not so much.

I Expect It to Mean Something

The game establishes an expectation that this stuff matters, but it turns out, this layer of RPGish stuff really doesn’t matter most of the time. The big decision you get to make each turn – and it’s the decisions in games which breathe life into a game – is choosing your thematic reaction to the situation at hand from the Reaction Matrix.

Let’s say you’re up against an Insane Hunchback. You’re directed to consult Matrix C. There you find the list of reactions. In this case, there are eight reactions. You could Beat the Insane Hunchback, Rob him, Avoid him, Question him, Attack him, Hire him, Follow him or Enrich him.

How you’re going to deal with this Insane Hunchback is a decision point and really the only one in the game other than deciding where to move, so I expect it to mean something. That is my personal expectation. Yours may be different, but mine is that the decision I make in a thematic game that has character skills ought to carry a good deal of weight within the thematic outcome.

I want to see a thread running from my decision, to my skills, to the paragraph about to be read. It doesn’t even have to be there all the time, but some of the time isn’t enough, and not very often isn’t enough for my tastes. I want to see that thematic connection MOST of the time.

Let’s say I decide to rob the Insane Hunchback because I have the Stealth & Stealing skill and the Acting & Disguise skill, both of which seem finely suited for a mission to rob an Insane Hunchback. Well, in Tales of the Arabian Nights, nine times out of ten, do you think you’re going to see these skills show up where they should, or where you might expect them? No, you’re not.

Not only that, once you’ve made your decision, which points you to one of the 2,600 entries, there is usually nothing more you can do to steer the outcome. There’s very few additional decisions. There are some – pick A or B kinds of things – but the game just begs for more. I’m Sinbad after all, and I want to choose my own adventure.

The various Status cards you’ll receive are also a sore spot. They’re lengthy, you seem to amass a lot of negative ones most of the time, and they weigh on you. Getting one or two is fun and sometimes thematic, but three or even four of them is just a kick in the nut sack.

How Long Will You Laugh?

You will laugh with your friends about all the bad stuff happening, and that’s part of the fun of playing a game such as this, but when does everyone’s misfortune just become so commonplace that it begins to drag the game down?

When you’re imprisoned, insane, and crippled all at once, these afflictions weigh on you when all you really want is that vicarious experience of being a hero and using your skills and decisions to affect your course. Just not randomly.

Our taste in games change, we change, and my time with Tales of the Arabian Nights has run its course. Perhaps I shouldn’t have let it stew on my shelf for so long before returning, but it’s not the game for me. While I wouldn’t turn a game down on that rare occasion my brother invites me to play something (he is a fan and still has a copy, as I soon will not), Tales is just too random for me, and that’s a shame. I appreciate, and even enjoy most of the write-ups in the Book of Tales.

Unfortunately, Tales of the Arabian Nights is like the Corn Palace in Mitchell, South Dakota; you appreciate the work that went into it, but you’re better off passing it by and heading straight to Mount Rushmore. (There, I worked in the Corn Palace.)

It doesn’t get any better this. Wait, yes it does.