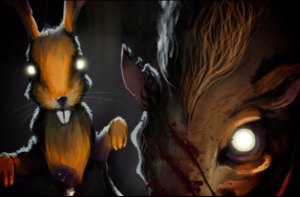 Don’t you just hate it when an evening around the campfire is interrupted by hoards of animated, dead animals? The dread is compounded by the fact that for this weekend getaway you decided to finally book one of those awesome campsites located well off the beaten path. Who wants to hear cars racing and radios booming out in nature? Now that you’re surrounded by a disturbing array of zombie animals, the downside is you’re a long ways from the safety of the main road. This is where designer Dave Killingsworth’s (SolarFlare Games) latest board game begins, in a nightmare forest as you set out in a dead run toward safety. The first person to exit the forest wins!

Hot Dog Skewer to the Head

Nightmare Forest Dead Run is a push-your-luck style game that features a unique approach to the genre. What makes it special is that it moves beyond the simplicity of a dice game and incorporates card play, light combat, searching for weapons and gear, wounds and even some player-versus-player interaction (if you like tossing the occasional hot dog skewer or skillet at a friend’s head). It does this all in an often comical, lighthearted way that is evidenced by the charming, yet disturbing zombie animal illustrations and descriptions.

The play area for Nightmare Forest is established with a line of face-down cards in front of each player’s character card. These cards represent the forest and obstacles (mostly zombie animals) ahead. This random line begins with two easy green cards, two moderate yellow cards, two difficult orange cards, and a final boss card. On the flip side of these cards are zombies ranging from difficulty 1 (the easiest) to difficulty 10. There are a few other surprises, including some allies and obstacles, but the vast majority are twisted animal baddies.

I like that players don’t begin the game with identical obstacles to confront. One player may have a harder time of it, but this asymmetrical layout dovetails nicely into the player interaction. That is to say if someone is getting ahead of everyone, you can slow them down by tossing equipment at them and attracting additional zombies to their space. The designer refers to this as turning your opponents into “critter bait.”

Dicing for Gear and Your Life!

As this is a press-your-luck style game, it just wouldn’t be complete without dice. You begin the game with a pool of four dice that increases by one die each time you enter a new zone of difficulty, meaning that by the time you reach the “boss” card, you’ll have seven at your disposal.

During your turn you can use as many of your dice as you want to search for gear. Each six-sided die has four positive sides, and one of these represents two successes. Needless to say, you need successes to find gear and vanquish zombies, and the more dice you use on gear, the fewer you have for zombie slaying.

The generous gear deck includes everything from rifles to pistols and machetes, to hot dog skewers, energy drinks and first aid kits. Yes, the animals bite. They crave your flesh like any self-respecting zombie.

The combat mechanic is straightforward. When you’re ready to take on the next card in your path, you flip it over and fight against the number on the zombie card. Let’s say it’s a four. You must come up with four hits among your dice and the weapon you’ve selected (if you have one). Simply add up the number of successes, add them to your weapon value and you’ll either be looking at a pile of zombie porcupine goo, or… not. In which case the card remains, and you receive a wound token. Collect five of these (I don’t recommend it), and you are out of the game. Don’t worry, the game plays quickly, so sitting out — while terribly sad and humiliating — is somewhat brief.

Since you are racing to the finish, the strategy of Nightmare Forest involves some dice management. You don’t just roll all of your dice, but choose the number of dice with which to fight.  And just to make your decision a little harder, you’re not getting those dice back after combat! (Unless you win, in which case you do get one of them.) If you can manage to get some gear, and eliminate a couple of zombie cards in a single turn, you will find yourself ahead of the pack. You will also be the likely target of your opponents’ animosity and unwanted gear. Remember, you can toss gear at people ahead of you to slow them down. This doesn’t always work — you have to roll — but it’s often worth it.

Besides balancing your opponent’s progress with how much dice to spend on gear and combat, you also have to consider your attack strategy with the weapons you’re finding (hopefully). Loud weapons such as rifles and pistols may attract additional zombies (thankfully from the easier bunch), but they are great at killing things, e.g., add one or more successes to your combat result.

Nightmare Forest even takes into account the number of hands each weapon uses, so you can decide to use a string of one-handed weapons (each of which can only be used once per turn), or use a more powerful two-handed weapon. Or why not combine two, one-handed weapons? You can do that. Or how about using the Duct Tape card to combine two weapons into an uber weapon? Did someone say shotgun with a tent stake attachment? Hell yes!

Moving into the Kickstarter, the rules for Nightmare Forest Dead Run are nearly done and quite polished already. The game play moves along quickly, and teaching is fast and intuitive. My 10-year-old daughter picked it up straight away, and I’m guessing so would kids 2-3 years younger than her, unless they’re super scared of being eaten by nature’s cute furry critters, which honestly they should be.

You can play Nightmare Forest Dead Run with up to six players. And while it’s fun for two players, more players is more fun and competitive because it compels people to push their luck each turn and move farther into the forest. In turn, this forces others to play less conservatively in order to catch the leader. After all, no one wants to be left in the dust fighting snails and rabbits the whole game; it’s just too humiliating.

In the end, Nightmare Forest is a quick, light, fun, thematic, press-your-luck style game that will have you racing, running, gunning and hot dog skewering your way through a forest of nightmarish zombie animals and obstacles. Frankly, what’s not to like?