A Review of Dark Moon 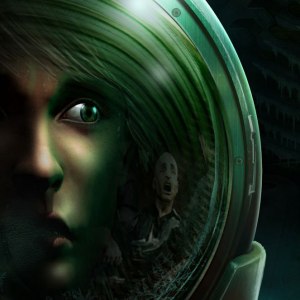 First there was the Battlestar Galactica of my youth, featuring a male Starbuck, a mechanical dog named “Muffit” and a weekly story to capture my imagination. I remember being in grade school and creating a viper hanger and launch tubes in the snow with my friend Shane. We would propel ourselves as fast as our legs would carry us, blasting imaginary cylons until the recess bell rang. Yep, the bell actually rang back then.

That was the first Battlestar Galactica (BSG) until the newer, much more awesome BSG came along featuring a female Starbuck, an old dog named Adama and a tapestry of shifting allegiances. I know at least a few friends who couldn’t handle some aspects of the final seasons. I think the supernatural mystery of Starbuck and the spiritual overtones wigged out my buddy Mike from Mount Horeb, Wisconsin so much that he didn’t even watch the last six episodes. Mike, I love you, man, but you’re insane and possibly a skin job. Another friend aptly identified the sophomoric romantification of primitive living in the series’ final episode. I mean, have fun succumbing to the cornucopia of diseases you’ll uncover in your new home.

WELCOME TO DARK MOON. The Noguchi Masaki interplanetary mining corporation welcomes you to its outpost on Titan, the dark moon of Saturn! You will be joining an experienced crew of miners, technicians, and adventurous souls who live to experience all the wonders that our solar system has to offer. Purpose, loyalty, camaraderie, friendship, and sacrifice all await you as a new and valued member of the Noguchi Masaki family! [It’s nice to be part of a family, that is until they try to kill you in every conceivable way.]

Not About Battlestar Galactica the Board Game, Really

I love the BSG board game by Fantasy Flight Games, and by extension I loved BSG Express, and now Dark Moon. Like its predecessor BSG Express, Dark Moon successfully distills Fantasy Flight’s popular board game down to its gooey, duplicitous center. Gone are the locations around Galactica and the space battles. But don’t fret, this isn’t a game about humanity’s struggle against the skin jobs and the search for a new home. Dark Moon exists in that sci-fi sweet spot, the microcosm — a small band of people trapped by circumstance in an inhospitable place.

Players in Dark Moon are assumed to be working within a mining facility somewhere, some place, and the game begins not long after one or more of your crew uncovers a spore, a bacteria, a something that infects crew members in a way that essentially turns them into terrorists bent on the station’s destruction. If you’re this guy, you’re Infected. You know it, but no one else does, and hopefully you can keep your horrible secret for as long as possible.

As infected, you’re not excited about keeping the colony in tip top shape, and you’ll work against fixing stuff that breaks, such as Life Support, Outpost Status and Shield Control. Those three main areas are the BSG equivalent of Fuel, Food and Morale, and if they tank, it’s game over and the infected win.

If you’re not this guy, if you’re not a raving lunatic out to destroy everyone and yourself, you are in the majority around the table and just trying to keep the station fully operational. You’ll be trying to fix what’s degrading. You’ll probably be talking smack (hopefully — I encourage that) and trying to root out the traitor or traitors, or you’ll be sitting silently and quietly going about your business, thinking that this silent thing is a good strategy when in fact I think this makes you look distinctly guilty.

This dance of repair and degradation in Dark Moon is all happening a midst a timeline of four Events. In keeping with the BSG comparison, these events are analogous to the jumps in the BSG board game. Complete the four events, and the uninfected win the game. If the infected manage to completely destroy Life Support, Shield Control or flood the Outpost Status with damage, the Infected win. 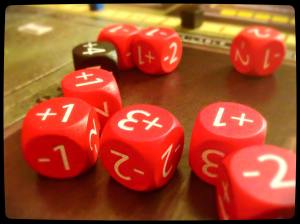 I think the one thing that makes this game great is the unique way in which players can contribute or sabotage the Task that is drawn at the end of each player’s’ turn. Now the tasks are the way the game degrades the shields, or life support or damages outpost status. You may see where this is going, but this is the time in the game where you have to step up to prevent bad things from happening or step up and pretend to prevent bad things from happening.

How does this work?

You’ll have a pool of dice behind a screen, and if you’re contributing, you’ll roll up to three dice and submit at least one of them toward the cause. Positive dice are good; negative dice are bad. That’s right, sabotaging the group is as easy as saying you rolled all negative numbers behind your screen, so you are therefore, regrettably forced to submit a negative die. Now imagine the perfectly innocent — the uninfected — in the same dilema. You roll all negative results and now you are forced to submit a negative die. You can see the fun here already, can’t you?

Around the table you go, trying to PASS the task at hand. Lot’s of dice rolling. Lot’s of accusations. Lots of fun.

If it’s not already obvious, this is a social game at its core, and table talk is encouraged. You can put a player in quarantine to minimize their impact in the game, you can reveal yourself as infected to have a whole host of new things to do on your turn, and you can even pass the Commander role from person to person by vote. Dark Moon does a great job of forcing these issues, too. There’s a Suspicious Activity track the ticks upwards, forcing a periodic quarantine vote on a player.

If you’re looking for faster-paced version of Battlestar Galactica, complete with hidden agendas, backstabbing and table talk, or never had a chance to play the most excellent BSG Express, Dark Moon is something you need to play. It supports up to seven players and retails for $60.

My friend, Chris, the poster child of Infection.

Like Loading...
‹ Risk Star Wars Edition — This is not Risk, but…
A Review of Tales of the Arabian Nights Board Game — It’s Just Like the Corn Palace! ›