A Review of Samurai Gardner 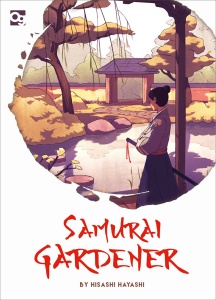 Even a samurai needs time to unwind at the end of a long day. Some attend to the gardens of their feudal lords, and that’s where you come in. Samurai Gardner is a new game from Osprey Games that challenges players to build the most impressive garden, that is if your samurai reflexes are primed to catch a fly with a pair of chopsticks.

Card by card, each player gradually builds a mosaic of connecting garden squares in four styles, Tatami, Garden, Path and Pond. Each card features a configuration of six of these styles. The goal is to line up as many matching styles in a row or column as you can. The more you line up or expand on your turn, the more points you get. If you manage to create multiple rows of different styles, you score bonus points. Scores are recorded as the game progresses. The first player to 25 points wins. 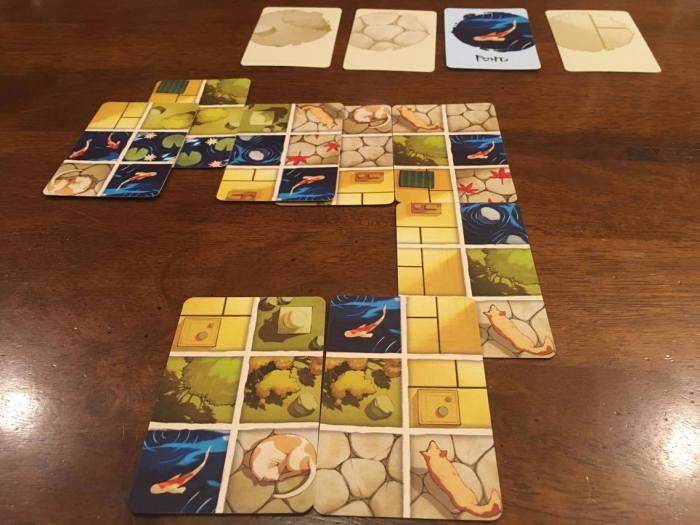 Getting the card you want, however, isn’t as simple as selecting it. Samurai Gardner can be as much a speed game as it is a cerebral one.

Each round begins by drawing one card per player face up onto the table. Everyone places their hands under the table. The starting player calls out, “Ei! Ei!,” and everyone shouts “Oh” as they race to place a hand on top of the card they want.

Yes, your sweaty friend’s palm may end up on top of your hand, albeit for a split second. (You don’t have to play this way, and an optional rule accounts for groups who want to eliminate the speed element.)

In this mad scramble, everyone eventually ends up with a card, but not always the “best” one.

A Gamers Version of Kingdomino

If you played the 2017 Spiel De Jahres award-winning game Kingdomino, you’ll be inclined to draw some immediate comparisons, but connecting matching elements is really where it ends.

The scoring mechanism in Samurai Gardner is more challenging than simply lining up matching features. You can only score if your matching feature card is face up! That means you have to find a way to score once on Tatami, Garden, Path and Pond before you can score the same type again. All of the cards are reset (flipped back over again) once a player has scored on each.

Rules and restrictions on card placement introduce additional strategic elements. For example, you are only allowed to place cards vertically. Players may also overlap previously placed cards as long as they don’t cover up a matching row of three or more squares. Finally, the prospect of bonus points encourages players to create multiple scoring rows in different styles with the play of a single card.

Samurai Gardner is a fun, fast-playing matching game that has more strategic depth than Kingdomino. The straightforward, score-as-you-go mechanism adds just the right amount of tension, forcing players who are behind to burn more brain calories to catch up.

Card placement options are interesting and challenging as you create your garden in a way that compliments the current state of your scoring (feature) cards. Not being able to score on each style forces players to focus on future plans as much as scoring in the moment.

Finally, if you’re not keen on the speed element of card selection, incorporating the optional rule of a rotating first player and selecting cards in a more traditional and less “Ei! Ei! Oh!” fashion works great and is my preferred way of playing the most excellent Samurai Gardner.

Written by Scott Bogen, The Board Game Show