Home › Reviews › A Review of Kingdomino

A Review of Kingdomino 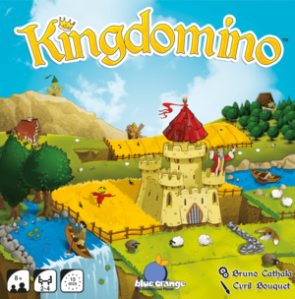 Everyone knows about the classic game of Dominoes where you connect matching ends that form chains and generate points. As a kid, my idea of Dominoes usually involved standing them up in long lines for the purpose of pushing the end piece and watching them fall over in a chain reaction. Now THAT was fun, and it was more fun than playing Dominoes, until now.

Kingdomino (designed by Bruno Cathala and published by Blue Orange), which won this year’s Spiel des Jahres (Game of the Year), is a fresh new take on the classic game of Dominoes. Instead of pips on rectangular blocks, Kingdomino displays different types of colorful terrain on thick cardboard pieces. Instead of esoteric rules, Kingdomino features better ones. Instead of a “hand” of Dominoes, Kingdomino has players selecting their tiles from a pool each round. All along the way, Kingdomino is more strategic and enjoyable than its classic predecessor.

The aim of Kingdomino (designed for 2-4 players) is to connect as many of the same terrain types as possible in order to form groups of contiguous areas, the bigger the better. Your only constraint is that your kingdom can be no larger than five squares by five squares. Each player creates a separate kingdom with a castle (wild card) as the starting point.

If Kingdomino only featured forest, grasslands, wheat fields, lakes, etc., it would be too simplistic and too much like regular Dominoes. Instead, a selection of tiles within each terrain set contains one or more crown icons. Having crowns is the only way you can score points for an area of contiguous terrain, because in the final analysis, each player will count the tiles within in each area and multiply that number by the number of crowns. No crowns means no points. Yes, eight connected tiles of forest is pretty great, but 8 x 0 (crowns) is zero, and all your forest hoarding will go to waste! Confused about scoring? Here’s a handy graphic from the rulebook: 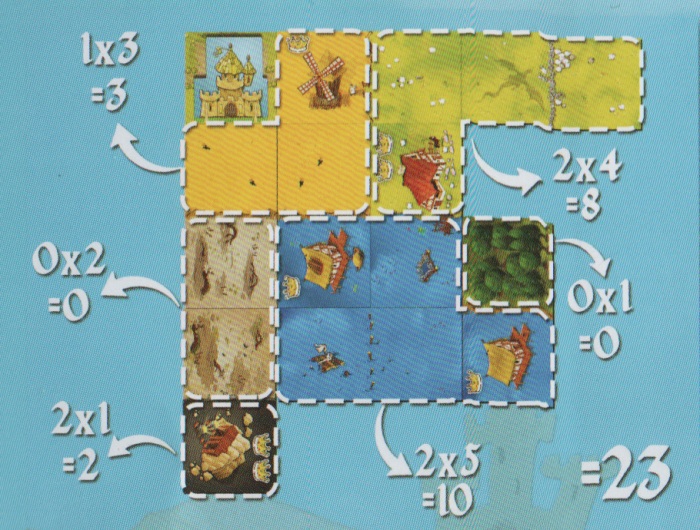 My Tile is Better than Your Tile 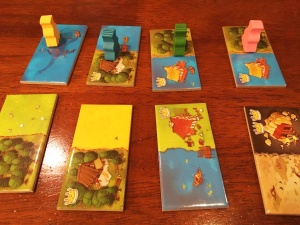 Tile selection is as simple as randomly drawing out as many tiles as there are players and ordering them numerically (the numbers are the reverse side). In turn order, players place their meeple marker on a tile to claim it. Then a second set of tiles is placed, sans meeples, so you can set your greedy eyes upon your next selection.

To further illustrate this, in a four-player game you would now have four tiles with meeples and four without. The first player in a round is always the player with the marker on the top tile (the lowest numbered tile). The first player will also have first dibs on the new tiles. Yes, that means the same player could self-select to be the first player every round by continuously choosing the first tile, but at some point — and this always happens — a juicier tile will appear lower in the turn order. 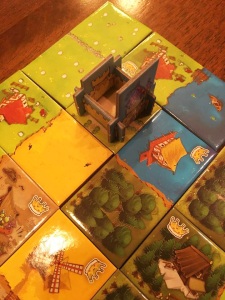 If you haven’t guessed it, claiming tiles is a big part of the strategy in Kingdomino. Do you expand your wheat field with the two-field tile, or do you make a defensive play and grab the grassland tile with two crowns because your neighbor is killing it on points in his massive grassland kingdom? Do you go for the top tile so you get the first pick of new tiles next round, or do you grab another for quick points?

Of course the rest of the game’s strategy involves your actual tile placement. You need to leave room to expand your high value areas (lots of crowns and/or lots of the same tile type) and insure you’re staying within the bounds of a five by five grid. Typically, a lack of variety in terrain tiles can result in hamstringing yourself later in the game. Doing so means you may find yourself unable to place a tile at all! This situation is most common toward the end of the game as each five-by-five kingdom fills up, and space is limited.

Kingdomino scales extremely well for any number of players (2-4) by adjusting the tile count. There are also a number of variants included, my favorite being the one for two players where all the tiles are used, and each player can create a kingdom that’s an impressive seven-by-seven tiles!

I’m honestly thrilled to discover this new game and add it to my collection. Kingdomino is the sort of game that will be a mainstay at family gatherings due to its portability, ease of play, and the fact that it plays in 15-20 minutes. 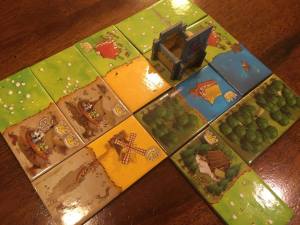