Home › Kickstarter › A Review of Blend Off

A Review of Blend Off

You might think fruit and vegetable laden smoothies have been around maybe two or three decades at most.  But if you consider that human beings will always find every possible way to use a new technology, you’ll understand that the smoothie has been around as long as we’ve had the ability to pulverize gardens into a creamy, frothy liquid. In other words, smoothies have existed since the advent of the blender. We’re talking the 1930’s. So ask yourself, where are all the smoothie-themed games? We’ve had 85 years to design something!

Thanks to the creativity of Scott Eaton, we now have Blend Off!, the speed dice game of smoothie creation, currently funding on Kickstarter. If you’re getting the sense you’ve heard of Scott Eaton, it may be because he is the designer of 7 Wonders: Empires and Catan: World Wonders, popular fan expansions to these well known board games. Let’s just say this guy knows what he’s doing when it comes to game design. Blend Off! will be his first commercially-available work.

Eaton describes Blend Off! as “a real-time speed resource management game. Roll the dice as fast as you can to collect the right fruit to fill the customers’ orders. Race your friend(s) to fill the orders before they do.” That’s it in a nutshell, which if you have one of those really expensive yuppie blenders collecting dust in your cupboard, you probably won’t even notice things like shells in your smoothie. Fiber!

Tools of the Smoothie Trade 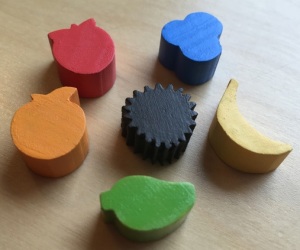 Other than yelling “Blend,” to begin a game of Blend Off! you’ll place two blender cards in front of you next to a six-sided die depicting five tasty smoothie ingredients, including blueberry, mango, strawberry, banana and orange, plus a question mark on the sixth side. You and up to three more aspiring smoothie mixers will all have the same starting equipment. In addition, a finite number of matching miniature (and possibly “squee”-inducing) wooden fruits are placed within reach of everyone based on the number of players.

What Smoothies Will You Make?

This is where the deck of smoothie orders comes in. The deck has a name. It’s called “Becca,” because she is the boss of you and is barking out orders. (Yes, even Blend Off! has a thematic back story to get you in the blending spirit.) The deck is created based on the number of players, and then one card per player (plus one more) is drawn off the deck to form a pool of orders, each with its own unique combination of ingredients, and each with 1-3 victory points. 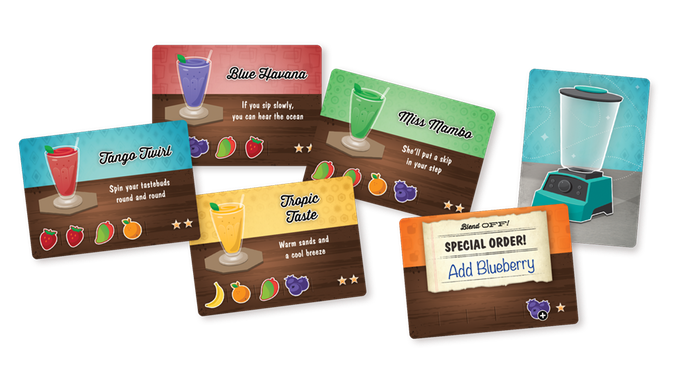 Here is where things get frantic and crazy fun. Everyone picks up their die and begins rolling. With each die roll, you may grab a wooden fruit that matches your roll, and place it on one of your blender cards, or grab the one of your choice when you roll a question mark. You’re doing this because you have your eye on the prize, one or more of the orders in the middle of the table. Fulfill an order exactly, and you grab the order card and replace it with another. All players continue rolling, completing orders until the deck runs dry and the last order is done! The person with the most stars wins.

To make things more interesting than rolling a die and grabbing tokens to complete orders, “Special Order” cards are mixed in to modify the normal order cards, adding or subtracting ingredients. This can put a strain on your focus (it’s easy to forget these modifications while you’re rolling like mad), and if you screw up and end up with a blender full of non-matching nonsense, you will find yourself dumping the whole lot and starting over.

And by the way, you can only dump the whole lot. It’s all or nothing. Dumping also happens when the precious recipe you’re blending is suddenly snatched away by another player. Warning: this will happen often when playing a 10-year-old who has appreciably faster reflexes and neural networks than Mom and Dad.

While you may be losing repeatedly to a 10-year-old, you do have a weapon in your arsenal. It’s the dreaded durian fruit, a spiked horror from the depths of hell. Anthony Bourdain described the scent of durian “like you’d buried somebody holding a big wheel of Stilton [cheese] in his arms, then dug him up a few weeks later.”

You can unleash this wretched fruit and contaminate one of your opponent’s blenders when you reach for a fruit you’ve rolled that’s no longer available. The target of your sabotage (a.k.a. your 10-year-old who is kicking your butt) has to return the contents of her blender to the pile and begin again!

My Blend Off Review — Final Thoughts

Blend Off! is a very entertaining, fast-paced game that features a mix of luck and speed and a dash of “hurt your neighbor.” My wife, daughter and I shared a lot of laughs and “hey, that was mine!” moments while we raced to the finish line. This is a terrific game to kick off a night of board gaming, as it will no doubt get everyone amped up. Blend Off! also plays very quickly. We finished most of our games within 10 minutes, and it resets in about 60 seconds.

Finally, if you want to mix things up a bit, you can explore some of the other play modes, such as “Blend Off Jr.,” which is more of a turn-based Yahtzee type variant that removes the speed element for youngsters or oldsters. There’s also a “Race” version that takes away the public pool of fruit and gives everyone their own personal stash.

There’s a lot of game in Blend Off!, and I’m confident that gamers of most genres and styles will find some joy in being the most accomplished mix master at the table… eventually… if you’re not playing against a 10-year-old.

Check out the current Kickstarter!

Like Loading...
‹ Great Scott! – The Game of Mad Invention
A Warfighter Story and Review — Baker and the Drug Huts ›