There are many power chords in the epic symphony that is the Dungeon Crawl Classics Roleplaying Game. There’s the foundation of classic Appendix N fantasy literature, the inspirational reading list of Gary Gygax. The 1970s heavy-metal airbrushed-wizard-mural-on-a-van aesthetic. A simple but infinitely rewarding magic system. Old-school rules with clever new mechanics that constantly deliver memorable moments and wild plot twists. But I would claim that it’s the enthusiastic community of DCC players and judges that makes the game soar. It takes a dungeon to raise a grizzled adventurer, and you couldn’t ask for a nicer group of folks to throw bloodthirsty monsters and untold treasures at you.

Your starting tavern is the DCCRPG community on Google+, where you’ll find the writers and artists of DCC interacting and collaborating with its fans. The barrier between creators and fans is as transparent as a gelatinous cube, jiggling with new ideas, rules, and game material. Many of these ideas coalesced into The Gongfarmer’s Almanac, a zine created by the G+ community (stretching across six volumes!) kicked off by DCC author Harley Stroh that was free at Gen Con 2015 and is now available online. You can read “The Dryad’s Tree,” an excerpt from my DCC novel, in Volume 4.

There are also numerous third-party publishers you’ll meet on G+ that release DCC content with the approval of Joseph Goodman, the game’s creator.

Along with these products are several ongoing zines that illuminate new settings for the game. One of the brightest lights in this galaxy of content is the sci-fi zine Crawljammer, a blast of DCC spacefaring adventure by Tim Callahan. One day, Tim’s post on G+ hit me between the eyes like a laser-lance driven home by a charging mecha-mammoth:

“Just getting a sense of the interest… If I run a Crawljammer/DCC one-shot in Brooklyn on October 11th, is anyone there interested in attending and/or does anyone know a place where I could run such a game? I will be in town that weekend for the New York Comic Con, and want to get a game on!”

How could I pass this up? I responded to Tim quickly: “Dude, cruise over to my place. This crawl shall be jammed.”

I tractor-beamed three space-pirates (players in my own DCC campaign) and for the first time in forever, sat myself on the other side of the dungeon master’s screen. That’s actually just a metaphor, as Crawljammin’ Tim Callahan don’t need no screen. Tim rolled into Brooklyn with his friend Ben Marra (a creator of excellent comic books) and a stack of character sheets, and the game was on!

The party was assembled: Ulysses Zanzibar the Technomancer; Gillardo Zan the Lizardman Mercenary; Bartimus Rex the Psychic Knight; Poltarth Wopthar the Space-Halfling; and myself, Chongar of Venus, the Riftrunner, a celestial monk who could unleash chaotic fire magic and punch through walls with his phlogiston fists.

We lived, we loved, we laughed, we cried. We defended a pyramid from a horde of bestial humanoids. We sampled the delights of a mushroom forest. We explored a subterranean complex and were buried by an avalanche of radioactive larvae. Only wee Poltarth Wopthar survived, running away alone beneath the weirdling sun. We had a blast.

Sadly Tim had to return to his home planet (and go on to publish his first DCC adventure, “Advent of the Avalanche Lords”). Before long, I too faced a long journey of my own. After living in New York City for fifteen years, my wife and I moved to Seattle this past summer. It was hard to say goodbye to so many friends, but the DCC community surrounds us, it penetrates us. It binds the galaxy together. Here in my new town lives one of the most penetrating talents of Dungeon Crawl Classics, Jobe Bittman.

Jobe is the author of several DCC books including the adventure modules “The One Who Watches From Below” and “The 998th Conclave of Wizards,” as well as a compendium of flavor for fiends, “The Monster Alphabet.” I had gotten to know Jobe as one of the hosts of Spellburn, a podcast that covers all aspects of DCC, and subsequently through the G+ community.

Soon I was on a ferry heading out from Seattle to an island of rugged pines, where Jobe picked me up in his bad-ass 1968 Ford truck and drove me to his friend’s cabin in the forest. While fat raccoons frolicked in the stream flowing behind the cabin, five of us picked up the dice and delved into Jobe’s deadly dungeon. Feeling inspired, I used class rules from Crawl! (another DCC zine) to play a bard. That’s how supportive this community can be—at the age of 42, I finally explored my inner bard.

The enchanted forest of the Pacific Northwest was a big change in setting from my apartment in Brooklyn, but the important things were the same—a crew of smart, funny, creative people around the table having a great time crafting a narrative together. And also setting each other on fire if they’re a chaotic wizard. 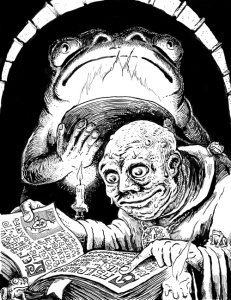 DCC is a gem of a game, but the rules also invite you to create your own. It’s rewarding and inspiring just to see all of the creativity shown in the G+ community, and if you want to share your writing, art, and game design, it’s hard to imagine a more friendly and supportive scene. (Except for Doug Kovacs, the visual architect and master artist of DCC, who will bite your ass off. It’s fine, though, because he’s the coolest.)

And ideally, the people you meet online can get together around a real table somewhere and roll some funky dice, from Brooklyn to Seattle and everywhere else! Or you can play online with those people too, hey, whatever works, dungeoneers. DCC attracts a fine crowd of enthusiastic, intelligent, talented gamers—worthy adventuring comrades all. The kind of folks who will stand by your side, until you are slain by pterodactyls and they loot your corpse.

“The Monster Alphabet” by Jobe Bittman

Dungeon Crawl Classics from Goodman Games, including “Advent of the Avalanche Lords” by Tim Callahan; “The One Who Watches From Below” and “The 998th Conclave of Wizards” by Jobe Bittman; and DCC cover art by Doug Kovacs.