Home › Episodes › Review of A Study In Emerald

Review of A Study In Emerald 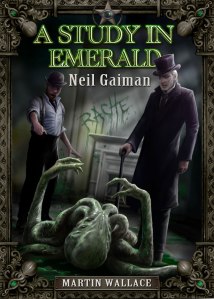 Imagine a time when the Great Old Ones are already here. The leaders of the world are beholden and complicit in the enslavement of humanity. Some of these leaders are monsters. In Berlin, “The Burrower Beneath” reigns supreme. In Rome, we have “Rhogog,” born of Cthulhu’s blood. In Washington, we find “He Who Presides In The New World.” There are more.

It is the late 19th Century. Most of us are powerless in the face of these blasphemous forces beyond comprehension. Some — those we refer to as “The Loyalists” — hope to maintain the status quo, cow-towing to their incomprehensible masters, even striving to hasten an all-out war. But a growing band of brave Restorationists and their allies are fomenting a revolution, striving to destroy their ancient overlords, and those who support them.

Scott Bogen gives you a sneak peak at what he’s been playing lately, including Phantom Fury, Warfighter and the upcoming Kickstarter, Nightmare Forest: Dead Run. Featured in this episode is the rather daunting, but marvelous, A Study in Emerald board game. Finally, get ready for Holiday Slush with a popular throwback segment of Cocktails With Ash Green. Let’s begin now, shall we?

Stream Episode 23 (Supporting Ancient Overlords and A Study in Emerald) below, visit iTunes, or grab the mp3 file. 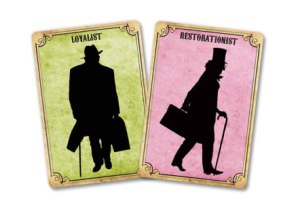 A Study In Emerald, designed by Martin Wallace, and inspired by the short story of the same name by Neil Gaiman, pits the Loyalists and Restorationists against one another. Each player randomly assumes one of these factions, keeping it hidden from the others. Either quietly or overtly, players work toward their goal of either supporting or undermining the status quo, all while keeping a close eye on everyone else, because there just may be a like-minded ally or two in their midst.

The mechanics in A Study In Emerald are hardcore Euro, but the theme is so well-wrapped and folded into this game that you would swear you’re sailing in a beautiful ocean of Ameritrash.

A Study in Emerald is a treasure to behold. It is an elegantly crafted tapestry of decision-making, balance and deception.

The ultimate personal goal is to have the most victory points, but there is a fascinating twist. Whomever is in last place in terms of victory points at the end of the game, that person, and anyone else in his or her faction, is automatically out of contention for winning the game. That’s right, if I’m a Loyalist and I have the lowest points among everyone at the table, all the other Loyalists are knocked out, regardless of score!

Put another way, you can’t just be winning personally; you have to make sure your entire faction — should you know who they are — is doing well enough that no one is left lagging behind the pack.

and Other Family Favorites

The heart of A Study in Emerald is card drafting. You essentially bid for cards with influence cubes, and the cards you win are added to your own personal deck. From this deck, your hand of cards is drawn. You have access to an impressive array of possible actions on each of your turns.

The board is made up of city locations around the world, and you have a starting agent to navigate this God-forsaken landscape With a bit of strategy and luck, you are sure to acquire additional agents along the way. Meanwhile, you’ll be struggling to gain a tenuous hold on cities (control is nearly always tenuous in this game), and in doing so you’ll get some victory points.

Each city has a fictional leader (or Royalty), such as the ones I mentioned at the start of this review, but also include family-friendly favorites, such as The Spinner of Webs and Nyarlathotep. Loyalists can hide these profane leaders for points; Restorationists can assassinate them for points. And loyalists and Restorationists can even assassinate each others agents. 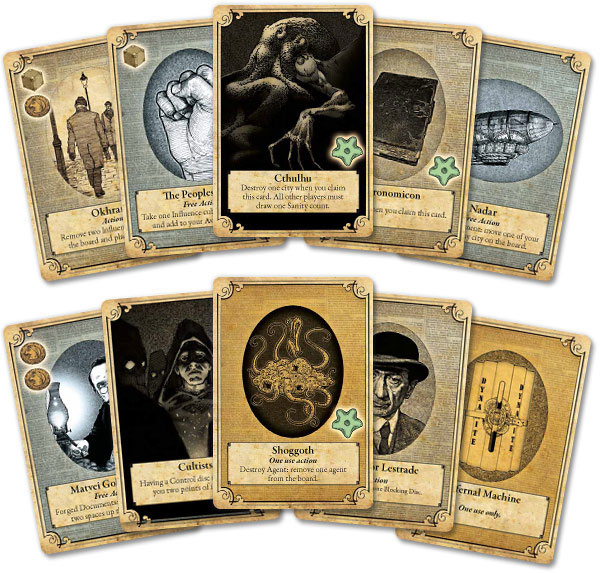 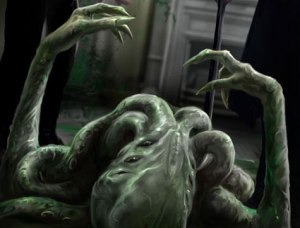 A Cornucopia of Lovecraft

What else is going on in this epic war between the loyalists who want war and the Restorationists who want a revolution? A lot more.

How about turning your enemies’ agents into your personal vampire army? Check. You can do that with the right card. How about creating a horde of zombies? Check. That’s possible, too. How about slowly turning your opponents completely mad, that is to say, bat shit crazy. That’s a strategy. What about double-agents? Your friend thought Sherlock Holmes was under his control. Think again, he’s working for you now.

What about introducing some large, pinkish, fungoid, crustacean-like entities? That’s right, it’s the stuff of nightmares. Some Lovecraftian Mi-Go may be available to whisk away your agents to a safe place beyond time and space.

There’s even Cthulhu himself, and Shoggoths, and Otto von Bismark, and the Necronomicon. The list goes on, and I feel I’ve only cracked the surface. 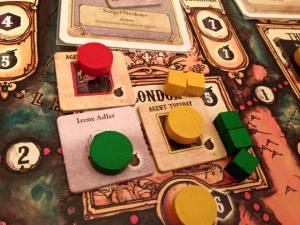 I think the best part of the game — besides it’s incredible theme and chaotic game play — is that winning isn’t everything. Like I said earlier, you can be killing it in points, but you had better make sure none of your team members are in last place, or you’re just plain knocked out of the game in final scoring.

Wait a second, did I just say “chaotic gameplay?” Yes. There are so many directions to go in this game, so many moving parts, that if I must say something negative about A Study In Emerald, it’s that it can be paralyzing for new players. But if you’re like me or the friends I invite to play a game such as this, the dark, thematic Lovecraftian genre alone will provide all the motivation you need to dig deep into the strategy and avenues of victory just waiting to be uncovered.

I have a fairly loose top 10 or 15 list of games that have been floating around in my head for a few years now, and A Study In Emerald is definitely one of them.

If you trust me, dear reader, you need to buy this game.