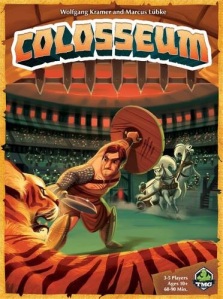 Earlier this year Tasty Minstrel Games announced it would use Kickstarter to fund a reprint of the popular Days of Wonder game, Colosseum. Recently, the new cover art was released.

If you’ve ever waded into the gladiatorial arena of gamer opinions, it bears all the markings of a true death match. There are those that take no mercy. There are some that are more timid in their approach and get mauled quickly by the lions, and there are those like me who sit in the cheap seats and watch the bloody spectacle from a distance, looking for just the right time to fling rotting vegetables onto the fighters below.

This time when the portcullis was raised, a brightly-colored image emerged that would be the new face of Colosseum. The crowd went wild. Cabbages were flung. Insults were hurled, and chamber pots were emptied. Here is an entertaining sampling of the chunks of hatred hurled at Colosseum’s new image that was posted on Boardgamegeek’s Facebook page:
Gross and cartoony.

HAHAHAHA! That is horrible box art!

Hate hate haaaate that art style myself. A real turn off and makes me feel like I’m playing a kids Channel game.

Tmg seems to like this cartoonish style and it just irritates me. It’s a huge turn off for me for all their games. 😦

It’s not April 1st guys. I’ve been wanting the game but if that’s the art style, I want nothing to do with the new version.
It is bad art though. That is a terrible drawing.

That looks pretty bad. What were they thinking.

Pretty lame. The original looks great, and I understand that they have to differentiate their version, but if I saw this on a shelf and wasn’t familiar with the game, I’d probably pass it up.

One brave spectator — among a handful of others — sought to find meaning in the battle that had transpired. Here are some excerpts:

This discussion is a real eye-opener. I totally get how the new artwork doesn’t represent the game like the original did. It loses its historical reference that I can see is important. And I see a few people here who are willing to forgive the artwork for sake of playing a great game. A few like it for face value. But some of the comments I see here…. wow…. I’ve seen lots of “judge the book by its cover” but never so much as with the gaming community. I’ve found myself amazed more than a couple of times… But then, this is the internet where opinions and hating flow like a Rocky Mountain stream. And it is the pitfall of the artist that, no matter how good they actually are, no matter if they actually earned a degree, they can’t please everyone. Someone is going to have their hater hat on. It’s a bonafide guarantee….”

Others who didn’t care for the new artwork were a bit more diplomatic in their opinions:

I can’t put my finger on it but it’s just goofy and childish. Not like, “wow look at the art! Let’s play that!”

I think my main issue with this is it doesn’t scream ‘deluxe edition’ to me at all.

A small handful of others bravely stated their acceptance of the image, albeit timidly at times:

I dig the new cover. Lots of style. I think it stands out more than the original cover.
I like it.

I like it a lot more than the original art.

I leave you with this quote from the 2000 movie, Gladiator:

Commodus: “The general who became a slave. The slave who became a gladiator. The gladiator who defied an emperor. Striking story! But now, the people want to know how the story ends. Only a famous death will do. And what could be more glorious than to challenge the Emperor himself in the great arena?”

And by “great arena,” I’m pretty sure Commodus meant Facebook.