A Review of Fleet Commander: Nimitz

Written by Scott Cole. This article was originally published on Boardgamegeek, but has been reprinted here with the author’s permission.

I’ve never had the urge to review a game before, although I do love watching and reading reviews. Watching board game reviews has become an almost daily part of my life. Watching video reviews is not only informative, helping me to find games I want to buy, but very enjoyable. I don’t have the inclination to make a video review, nor do I have the on-screen charisma of some of our best beloved video reviewers here on the geek: Tom Vassal’s seemingly caffeine driven, eternal enthusiasm, Joel Eddy’s everyman’s approach, with that ever so engaging dark derision sneaking in from time to time, and of course, Marco Arnaudo’s haunting beauty…those eyes…..those eyes……those ey….. Um, sorry, felt like I was falling into deep water. . .

So what, or who has motivated my voyeuristic butt get off the couch and start typing? Why our good man, Chester, that’s who. Chester Nimitz. Admiral Nimitz. Fleet Commander Nimitz! I happily received my copy shortly before Christmas and in an uncharacteristic move, had it on the table the day after it arrived. I’ve played two campaigns so far, and the experiences have had such an effect upon me I thought was worth putting down and sharing with my geek brethren.

First off, in order to be a success for me, a board game needs answer “yes” to the following questions:

1. Is it fun?
2. Does it have a strong narrative?
3. Is it worth the money? (Quality & Replayability).
4. Is it historically feasible (not necessarily accurate)

That’s it! I’m a simple caveman. I don’t need any more from my board games. Ok…enough of my blathering……on to the review!

From the rulebook:
“Admiral Chester Nimitz became
Commander-in-Chief of the US Pacific Fleet on December 31, 1941…
One of Admiral Nimitz’s many successful strategies was giving out as much information as possible to those who
would be involved in a battle. He recognized that the
officers making the immediate battlefield decisions would
benefit from all the intel available.”

Brief Overview
Fleet Commander Nimitz is a solitaire, grand strategy game set in the Pacific Theater of Operations during WWII. You play the role of Admiral Chester Nimitz as he manages fleet and ground operations throughout the Pacific. The game engine plays the opposing Japanese forces while you control Allied and US sea, air and land forces. The game comes with four scenarios, each covering one year (‘42-’45). Every turn covers a 2 month period and during each turn you utilize resource points to move forces around the map to try to seize, defend or reinforce territory. The game utilizes one of my favorite mechanics in that each battle on the strategic map is pulled onto a “battle map” and resolved, giving a more tactical feeling. Victory is achieved by taking and holding scenario specific objectives.

Historicity
This is a grand, epic, sweeping game that does not attempt to recreate the nuts and bolts of the units, aircraft or vessels involved. I was surprised at the vehement discussions (dare I say arguments?) in the forums about how if a ship wasn’t represented properly, heavy vs. light cruiser let’s say, that it was enough not to purchase the game. While having that level of detail in a simulation is a valid requirement, and every Grognard worth his Consimworld account will tell you that realism is critical for a proper wargame simulation, especially on the tactical level, Fleet Admiral Nimitz doesn’t fall into that hardcore simulation category and anyone looking for that level of detail will be disappointed. Now, is that a bad thing for Fleet Admiral Nimitz? Absolutely not! It is a good thing. Again, we’re talking about strategic level operations that deal with Fleets, Divisions and Bomber/Fighter Groups. Nimitz is about applying combat power at the strategic level, and it does it very smoothly. Again, Nimitz is not an historical simulation, but rather a recreation of the Pacific Theater and the units involved, placed for you to do with as you decide, not set to play out with any historic accuracy.

Components
It’s DVG!! Top quality everything! There are so many counters included that you will want to purchase the DVG counter trays. Box is beautiful and deep and perfectly holds 3 DVG counter trays, which is what you need for all the counters. *Tip: sort your counters by unit and year (top left corner of each counter). I sorted mine by unit type only before reading the rules, and my overzealousness was rewarded by having to go back and resort everything. Rules are good and fully functional. They could use some clarifications for a couple of things, (which Dan Verssen has been doing in the forums), but nothing that will cause any major issues. Maps are beautiful. The dice may be my only issue….it seems to roll too amazingly well for the Japanese bombing runs on my carriers……I may have to switch it out. Bottom line: Components are excellent!

Replayability
The game comes with 4 scenarios, but the replayability comes from the game engine rather than the scenarios. Japanese force movement is randomly generated. Now, when I first read this, I was very concerned. How can a random game engine make the smart decisions to deal with my ability to focus combat power and resources? I will just run circles around it? Well, it turns out that while random, the game engine does an excellent job at putting pressure on the player. It does so by going last in the movement, after the player commits forces. Now the player has limited scouting ability, only being able to see some of where the Japanese forces will deploy, so by and large, the US player is anxiously waiting to see what the Japanese forces will do. And they always seem to go where you want them least. The random engine does a wonderful job. It adds a delicious tension to every turn. I love it. The random engine makes every game completely different. Lots of replayability here.

Narrative
Does it paint a picture? Does it tell a story? Does it sing a song? Oh yes, my friend, it does….well, maybe not so much singing, but definitely gives you war stories to tell!

Yes, we took the island. Yay! Yes, they sunk the Lexington! Boo! The USS Phoenix managed to survive several rounds of carrier based air attack as well as a Japanese torpedo strike. They took the brunt of the Japanese attack, allowing the Marines to secure and hold the island. One cruiser holding its own against overwhelming odds? Great stuff! I will love the Phoenix forever. It made me go look her up to see what she had actually done during the war. Even though combat is necessarily abstracted, still makes you care about your units. I wanted to know about the USS Phoenix because of how personal the combat became. *Totally irrelevant, but interesting fact: The USS Phoenix was sold to Argentina after WWII and was renamed the ARA General Belgrano. She was sunk in 1982 by the British submarine HMS Conqueror during the Falkland Island War. Great stuff, eh? Ok, back to the review. . . Fleet Commander Nimitz creates great narrative and tells a different story each time. Good stories. Epic stories. I laughed. I cried. I cursed the evil Japanese dice as the Lexington sank beneath the waves. . .

Fun
As hopefully I’ve already imparted, this game is fun! It is replete with hard decisions, tense moments throughout, from awaiting the Japanese forces to move to your dive bombing attacks on that lone Japanese Carrier you spotted. You are always balancing on the edge of your chair as the dice rolls. It plays quickly and in between sessions I am always thinking about it. I think that says a lot about a good book, a good television drama and a good board game; when you’re not actively engaging in it, but your mind still drifts to it. I’m constantly thinking about what might happen or strategizing my next turn. Not many games do that for me. This game is really fun.

Issues
Happily, the only issue that I have with Fleet Commander Nimitz is the lack of an epic campaign that runs the length of the war. Each scenario is only one year long. It would be great if the outcome of each year carried into the next, so that decisions in 1942 would impact 1945. It is in no way a deal breaker, and I’m sure some enterprising BGG’er will come up with a war-long scenario, or even DVG will develop one if demand for one is high enough. 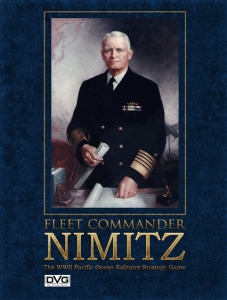 Conclusion
I am stationed here in Hawaii. I drive on the Nimitz Highway almost daily. I see the USS Arizona Memorial with the battleship USS Missouri moored close by. Buildings near where I work have bullet holes preserved in them from the Japanese attack on Pear harbor. I am blessed to be in a place that’s propinquity to WWII greatly enhances my enjoyment and appreciation for Fleet Commander Nimitz. I am career Army Officer and while I do love the four course meal of a deeply detailed historical wargame, I don’t always want charts and chits and hours of slogging through the beautiful minutiae of a wargame engine. Sometimes I want a soft serve cone of thematic fun, dipped into the chocolate sauce of a broad, sweeping history. Fleet Admiral Nimitz gives me this. It provides a wargame experience, outstanding theme, solid mechanics, delightfully difficult decisions and satisfying outcomes that keeps me thinking about the next turn, or what I will do different next game. If you are a Grognard looking for simulation level detail and close alignment to historical facts and timelines, I would tell you to curb your expectations. Nimitz doesn’t provide this, nor does it strive to. What it does do is provide a solid, streamlined wargame of medium complexity that focuses on strategic operations and drips with theme. Fleet Commander Nimitz is a high quality design and a high quality production. And best of all, it tells a great story. It tells the epic story of your command; how you lead the Allies to grand victories or how your failings lead to inglorious defeats. Whether victory or defeat, it is always an enjoyable gaming experience. I highly recommend it.

Did I ever tell you about the time USS Phoenix saved the day. . . ?