A Review of Ghosts Love Candy

One of the nine numbered ghost cards in each players’ hands that are used for possessing unsuspecting kids and eating their candy.

I usually don’t begin a review by saying something about the end of the game, but since this game is geared toward ages 8 and up, I felt an enthusiastic comment from my 8-year-old daughter would be appropriate. Upon completing the final round, she said, “Now, it’s time to eat some candy!” She said it with such gusto that I knew she had truly absorbed the spirit of Ghosts Love Candy by designer Danny Devine, the man also behind the incredibly fun card game, Mob Town.

Your hidden Candy Craving card. Part of the game’s strategy involves trying to figure out the type of candy most prized by your opponents. You know, so you can mess with them, of course!

Ghosts Love Candy is all about ghosts who love candy. Surprise! (Boo!) Each player assumes the role of one of these candy-hungry spirits, along with a hand of cards numbered 1-9. Each player also receives a unique Candy Craving card that features a hierarchy of six candy types with diminishing point values. This card serves as your secret agenda. For example, your ghost may love gummies (5 points), sort of like peppermint (3 points), and disdain candy corn (0 points). Meanwhile, a rival ghost may very well consider candy corn to be his most prized possession, and will stop at nothing to get it, perhaps even making kids sick in the process.

Everyone knows — especially ghosts — that the best source of candy is children, but the time of the year is absolutely critical. You see, according to legend (and by legend, I mean the rules for this game), it is only on Halloween when ghosts have the ability to possess unsuspecting trick-or-treaters to enjoy their high-glycemic treats.

Yes, the game is for ages 8 and up, and teaching your children about how ghosts possess children on Halloween is assuredly a great way to control your son or daughter when it’s time to go to bed, clean, put away the dishes, etc. “I said put away your toys or a ghost will take control of your body and make you do it.” See, good stuff. This is more than just a game, people!

Besides acquiring high-value sweet stuff, the crux of Ghosts Love Candy lies in the row of 4-8 kid cards, depending on the number of players. Onto each of these kids a random candy token is placed at the beginning of each of the game’s 8 rounds.

These kid cards have two important elements. The first is a number, which is the kid’s Sick Points. The second is the kid’s ability.

Game play is as straightforward as this:

The Astronaut’s special ability is great on defense. Knowing the value of the card your opponent has just revealed, you could move another kid’s candy and card to a location where your opponent’s ghost would make the kid sick. You know your opponent wants chocolate, but why make it easy for her to get it?

The abilities on the kid cards make this game a blast to play. In the preview set I received there are 24 kids, but only six of them are used at the beginning of the game. And roughly half the cards will be used in any given game, leaving you with nearly an infinite variety of layouts and ability combos. Some of the cards’ abilities affect adjacent kids. It’s fun to watch the kid cards come up and plan a strategy based on how they might interact with the other kids, their candy and your opponents’ ghosts.

I also really enjoy how the numbered ghost cards are used. You only get to play each card one time, and you will have one left over at the end of the game. If you really need to place first, you’ll play the “9” or the “8,” as the highest card played goes first in a round. Yes, you may in fact get to place first and get the candy token(s) you wanted, but you have exhausted your high-value card and will never get it back! Once a card is played, it remains on the board or is eventually discarded when a kid gets sick.

Other than determining who goes first, your numbered ghost card is also contributing to a kid’s Sick Points. A higher-numbered card will get you much closer to making a kid sick, or push them over the edge into a moaning, groaning, over-tired, over-sugared hellion. That’s what Halloween is all about!

For example, playing a “9” on a kid with Sick Points of “10” is now only 1 point away from vomiting up a rainbow of fruit flavors, leaving the row of kids and entering your stash. Again, that’s -2 points for you at game’s end. The bright side is that even if you intentionally make a kid sick, you still take their candy and trigger the kid’s ability. (Sick kids are replaced by new ones, so that the line of kids remains the same length.) 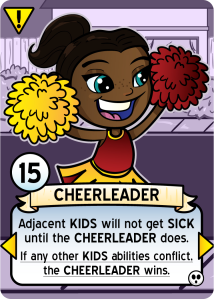 Here’s an example of one of the kids whose ability affects adjacent cards. The close proximity of the Cheerleader protects adjacent kids from getting sick, that is until she gets sick herself. And with “15” Sick Points, she can eat a ton of candy!

There is a ton of strategy in Ghosts Love Candy, and I truly enjoyed the process of devising my next move and attempting to out-think my opponents. What numbered ghost card do I play? Which candy do I grab, the highest-value candy on my secret Candy Craving card, or something less juicy so as to not give away my ambitions? Is it worth making a kid sick for the candy and the use of an ability? Should I play defensively and aim for taking candy that I know my neighbor wants? Is there a way for me to help myself and hurt my neighbor using a clever combination of card abilities?

It never ceases to amaze me how a game that appears so simple on the surface can have so much depth. Ghosts Love Candy hits that sweet spot most gamers crave, an artfully-balanced mix of strategy, ease-of-play, variability and fun. A card game that appeals as much to my 8-year-old as it does to my 40-something gamer buddies is a game worthy or your attention. You will be as happy as a ghost on Halloween to have added it to your collection.

Like Loading...
‹ Paddy O’Shea’s Golf Card Game Review
My Knee Jerk Reaction is to Use “Knee Jerk” in this Headline. That’s One Point for Me. ›